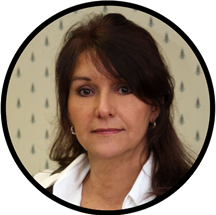 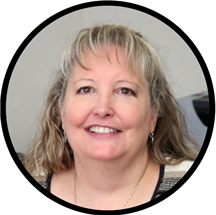 Judy Wilmarth is a paralegal who joined the firm in 2004. She studied at Penn State University, has a Pennsylvania real estate license and has substantial experience in the general practice of law. Judy works as Attorney Giangrieco’s paralegal and she also assists the firm’s attorneys in the administration of estates and in other areas of the practice.

Judy and her family are from the Springville area.

Marti Renyard was born and raised in New York City and has also lived in Miami, Denver, San Diego, and most recently Bergen County, New Jersey before moving to Montrose.

She began her career as an administrative professional in 1981 and was once employed by the largest international law firm in the world. She has been with the Giangrieco Law Firm since 2010. Marti is responsible for all real estate transactions and billing for the firm and therefore works closely with all four attorneys.

In her spare time, Marti enjoys spending time with her husband, Greg, her three children and grandchild as well as their various pets and livestock.

Holly was born and raised in Susquehanna County where she graduated from Elk Lake High School in 1999. Holly attended Central Penn College in Harrisburg and graduated with a diploma for Legal Secretarial in 2001. Holly lived in Harrisburg for approximately 3 years where she worked for a financial advisors group and also interned at the House of Representatives before moving back into the area. Holly has been a legal secretary since 2005.
Holly joined the firm in 2015.
Holly enjoys spending her free time with her family and her son, Nick.